The actress Michael Learned (b. 1939) is chiefly known for her role as the matriarch Olivia Walton in the tv-series The Waltons. For her performance on the show, she was awarded with the Primetime Emmy Award for Outstanding Lead Actress in a Drama Series three times. He resume also includes a fourth of these awards, which she got for her work with the 1981-1982 CBS medical drama show Nurse, in which she starred.

Michael Learned was also nominated for four Golden Globe Awards for her role has Olivia Walton.

Note: In the 1971 made-for-TV film “The Homecoming: A Christmas Story”, the character Olivia Walton is not played by Learned. Except for the Walton children and Grandma Esther Walton, all the characters were recast for the TV-series that followed the movie.

She was the eldest of six children born to Elizabeth Duane “Betti” (née Hooper) and Bruce Learned. All the children were girls: Michael, Gretl, Susan, Sabra, Dorit and Philippa. Learned said in later interviews that her parents never explained why she was given a masculine first name. Her father told her that if she had been a boy, she would have been named Caleb.

Bruce Learned was a diplomat, and Michael´s maternal grandfather was an attaché for the United States Embassy in Rome.

Until she was 10 years old, Michael lived on a farm in Connecticut. Then, the family moved to Austria, where the father worked for the U.S. State Department.

Michael discovered her love for acting while enrolled at the Arts Educational School in Tring, Hertfordshire, England. (Today it is known as the Tring Park School for the Performing Arts.)

In the late 1960s, Learned and her then-husband Peter Donat appeared in various roles with the American Conservatory Theatre in San Francisco, USA.

Prior to being cast as Olivia Walton, Michael Learned had not done any substantial acting in either film or television, but her performance as the matriarch of the Walton family earned her a lot of praise.

After the end of the sixth season of The Waltons, Learned agreed to come back for one more season on the condition that she would not have to work for the full nine months of shooting. When Learned left the show after the seventh season, the script writers gave her character Olivia Walton tuberculosis and sent her off to a sanatorium in Arizona to explain her absence. Since the character had not been killed off, Learned returned for various guest appearances until the show ended after its ninth season, and she also appeared in four of the six Waltons reunion movies that aired in the 1980s and 1990s.

In 1974, while still doing The Waltons, Learned appeared in the made-for-TV disaster movie “Hurricane” alongside Will Green – the actor who played Oliva Walton´s father-in-law Zebulon Walton on the show.

Michael Learned starred as Nurse Mary Benjamin in the medical drama Nurse, which ran on CBS for two seasons (a total of 25 episodes) in 1981-1982.

The show was well recieved critically, and Learned earned an Emmy for her role, but the show was not a rating success and CBS cancelled it after the second season.

Learned starred in two short-lived tv-shows aird by ABC in the late 1980s: The 1988 medical drama Hothouse and the 1989 sitcome Living Dolls.

In 2005, she appeared as Judge Helen Turner in the ABC soap operas “All My Children” and “One Life to Live” during the cross-over baby-switch storyline that involved both shows.

During the second season of the Nickelodeon teen drama “The Secret World of Alex Mack”, Learned played a ghost – the dead grandmother of the show´s main villain.

Returning to the world of medical tv-shows, Learned guest-starred as Mrs. Wilk in five episodes of Scrubs during the show´s fifth season, and then played Shirley Smith on General Hospital.

When The Young and the Restless veteran Jeanne Cooper had to take a medical leave in October 2011, Learned filled in for her as Katherine Chancellor.

As mentioned above, Learned was a stage actor before being cast for The Waltons, and she would later return to the stage numerous times, including on Broadway, off Broadway, and elsewhere. She did for instance join the cast of a national touring production of On Golden Pond in 2006-2007, and in the fall of 2008 she played the title role of Daisy Werthen in Innovation Theatre Works’ production of Driving Miss Daisy.

Learned married her first husband, the Canadian-American actor Peter Donat (b. 1928), when she was just 17 years old. They remain married for 16 years before divorcing in 1972. Together, they had the sons Caleb, Christopher and Lucas.

In 1974, Learned married Glenn Chadwick, but the couple divorced just three years later. Learned was then married to the actor-screenwriter William Parker IV in 1979-1988. After that divorce, she married the lawyer John Doherty in 1988 and they have stayed together ever since. The couple lives in California.

In a 2002 article published in the religious publication Daily Word, Learned revealed that at age 32, she realized she was an alcoholic. She spent some time in Peter Donat´s cabin on the California coast and decided to become sober. In the article, she also shared that this was the start of a spiritual journey for her, and that she has been sober since 1977.

Which of the made-for-TV movies about The Waltons is Michael Learnd in? 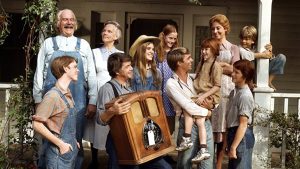